The Assore Gauteng Open Squash Championships took place at Parkview Squash Centre recently. This was part of a 4 event series that took place in South Africa and was a registered international tournament on the world calander for the professional Squash Association (PSA) and the Womens Squash Association (WSA).

Players from Pakistan, Egypt, England, France, New Zealand, Netherlands, Malaysia, Nigeria, Brazil and South Africa participated in the event. A total of 40 international players descended upon the Parkview Squash Centre during the month of April.

12 South African players made it into the men’s main draw and 6 ladies in the woman’s draw.

The skill and expertise of the top players saw some very exciting squash being played throughout the week. Michael Wood from South Africa performed extremely well beating the number 8 seed,  Arthur Moineau from France, in the quarter final round. In the semi’s he came up against Tom Ford from England, the number 3 seed. After being 2-0 up Tom Ford fought back to claw his way back into the match to draw at 2-2. The last game was a real nail biter with Tom Ford keeping his head and pulling out all the stops to win the 5th game 11/9.

The finals in both the men’s and woman’s events were very one-sided with Schweertman ousting out Tom Ford 3-0. Salmar Nasser from Egypt was just too fast and fit for Kylie Lindsay from New Zealand resulting in a 3-0 victory for Nasser.

Once the players are knocked out of the main draw they did some coaching sessions at the UJ and Soweto campuses with the Gauteng Development Squash programme called Egoli Squash. Their expertise, knowledge and experiences of the game were shared with the youngsters and much fun was had by all. 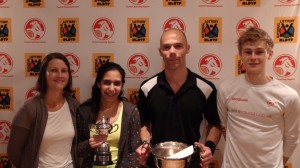 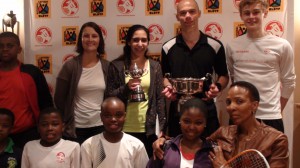